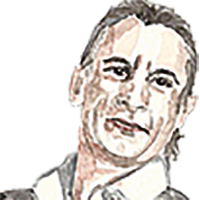 Tom (Naso) Ooghe, or how an advertiser does more than just singing in commercials

Probably you’ve heard of the name Tom Ooghe aka Tom NASO, you might just not know where you’ve heard it. Often the man is asked to sing in commercials. Tom Naso thaught himself to sing. He was frequently asked as a backingvocal by several Belgian artists. Yet his voice was also praised at several studio recordings and live shows troughout Belgium, the Netherlands and Germany.

At his home, life becomes one world of music: Tom and his wife perform at numbrous marital ceremonies and receptions (together with pianist Geert De Wever). This trio ‘Eaze’ is known for their preformances of the genre soft-poppy-soul-ballads.

With ‘The Martin Brothers’ Tom Naso created a soul-motown-project. ‘Smooth’ stood for jazz-pop.

The super-live-collective Tom generated around the year 2000 that carried the name ‘Boogie WonderBand’ conquered for about 15 years Belgium and the Netherlands.

TOM (NASO) OOGHE, member of:
The Scills, more than a popband !